Canada geese are a large wild bird species native to Canada, the United States, and Mexico that can be recognized by their characteristic black head, white cheek patches, and long black neck. They are primarily herbivorous and prefer open, grassy habitats near water. Mating pairs are monogamous and breed once a year in the spring. Families migrate to southern North America for the winter, flying in their characteristic v-formation, and then return to the same nesting ground the following spring. However, there are progressively more and more non-migratory Canada geese that remain in suburban and urban areas due to the absence of natural predators and abundance of food and shelter. Canada geese disperse seeds from the various plants they consume, are hunted as game birds, and their down feathers are used in coats, bedding, and numerous other items. Canada goose population sizes are growing, and as such, people have begun to consider them as pests due to the increasing defecation on lawns and destruction of agricultural crops by these birds. 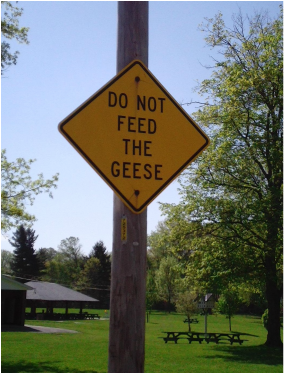 Edmonton's river valley and natural areas provide habitat for many wildlife species. However, with the city's ever-expanding urban sprawl, wildlife are entering and adapting to our urban areas and making them their home.

Canada geese live in short grass in order to keep an eye out for predators. Therefore, a manicured lawn or golf course provide optimal habitat for Canada geese. Furthermore, urban and suburban areas supply easily accessible food to Canada geese, especially since many people enjoy hand-feeding these birds. Due to the high prevalence of hand-feeding, many Canada geese lose their instinctual fear of humans and may aggressively approach people with the expectation of food. These birds may also eat garbage, compost, or other unnatural sources of food found in the city as well as agricultural crops. Additionally, because hand-feeding Canada geese contributes to their increasing urban population sizes, people are indirectly associated with and promoting the very nuisance problems that many people complain about. Therefore, the primary take-home message is: do not feed Canada geese! 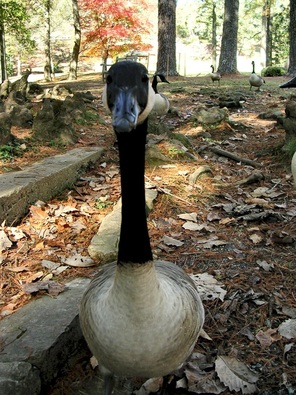 If you encounter Canada geese:
1. Do not feed them. Feeding Canada geese can cause overpopulation, poor nutrition, spread of disease, unnatural behaviour, pollution, delayed migration, safety concerns, and dependency on humans.
2. Leave them alone. As with all wildlife, the best thing for you, as well as them, is to leave them alone and not encroach into their space. Canada geese are extremely territorial and protective of their goslings (babies) and will respond aggressively to an approaching human if they feel threatened. Limiting interactions with Canada geese will ensure that they remain wild and able to survive and express natural behaviours.
3. Harass if necessary. If a Canada goose begins to exhibit aggressive behaviours (honking, neck outstretched, wings open, charging) towards you, then protect yourself by waving arms overhead and making loud noises in order to scare it away.
4. Enjoy them! Establish a respectful distance and enjoy the presence of these magnificent birds. Attempt to harbour respect and appreciation for Edmonton's urban wildlife. 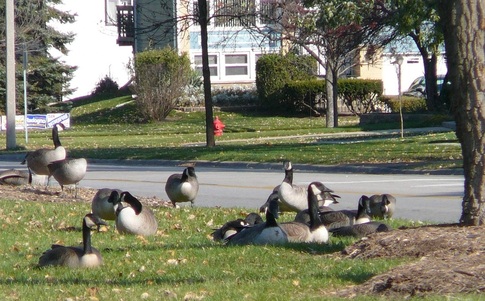 A “healthy backyard” is considered to be a backyard that encourages wanted wildlife visitors and, conversely, is inhospitable to unwanted wildlife visitors. If Canada geese are unwanted in your yard, the following preventative measures can be utilized to help create an unwelcoming space.
Further Information:
Managing Canada Geese in Urban Environments

Zoonotic diseases are infectious diseases that can be transferred between animals and humans. Canada goose feces in Edmonton's natural areas and lawns pose public health concerns. Canada geese and their feces are known to carry many zoonotic pathogens (infectious agents causing disease) that can affect water and air quality on public and private land. However, the ways in which transmission from Canada geese to humans occurs is not well documented.

The main pathogens include: 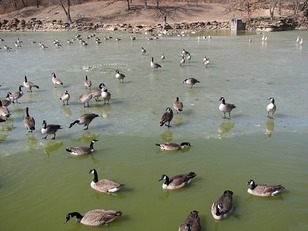 ﻿The most effective and noninvasive method for living harmoniously alongside Canada geese is to prevent possible nuisance situations rather than attempting to rectify an established population. However, if prevention was not possible and an area is having issues with overpopulation, certain population management tactics may be appropriate. It is imperative to note that Canada geese are protected under the federal Migratory Birds Convention Act, 1994, making it illegal to hunt, capture, or kill these birds or their eggs except during the hunting season or by permit. Additionally, Canada geese are protected through provincial regulation under the Alberta Wildlife Act. Therefore, the required permissions must be attained before any population management tactics are conducted.